After the discontinuation of Pannónia Film Studio he was a colleague at the Kecskemét Studio from 2003. He directed a total of 8 films here (The Tales of Aunt Ida, Stonemason Kelemen, Tales of István Kormos), but we also collaborated in his last work, the series titled The Life of Martin Luther, which he made on request from the Evangelical church.
Not many know that he was the first director who undertook the depiction of folklore art motives in animated films, joining with this the esteemed predecessors: Ödön Lechner, who also applied Hungarian folklore elements in architecture, and Zoltán Kodály, who used them in music.
He was an experimenting artist, and he handled colours with a masterly skill. Among his original films we can see examples where he reduced the palette to 4 colours (Anna Molnár), but also a ballade adaptation which he drew up with a series of black-and-white images (Stonemason Kelemen). The development of the final colour dramaturgy of the Toldi series produced by Kecskemétfilm can also be attributed to him.
In 2007 we welcomed him in the international jury of the Kecskemét Animation Film Festival, then at the festival in 2017 we organised an exhibition of the still images of his Luther series.
He was the first Hungarian director who broke away from the Disney traditions. His success was due to that he drew up his characters in a poster-like way, so that they could be well-comprehensible also for children.
He had a strong relationship with Kecskemétfilm for 17 years. The studio and the Moholy-Nagy University of Art and Design will provide funeral honours. His memorial service will take place at 14:00 on Friday, 7 February at the Evangelical church in Budavár (Bécsi kapu tér 1.) in the framework of a worship mourning. The memorial service speeches will be given by Tamás Fabiny, Chair-Bishop of the Hungarian Evangelical Church, József Fülöp, the rector of MOME, and Ferenc Mikulás, the director of Kecskemétfilm. 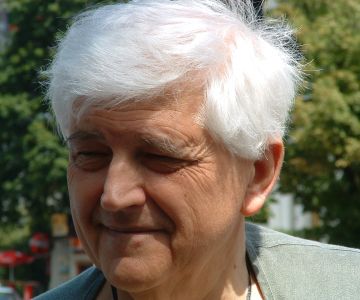